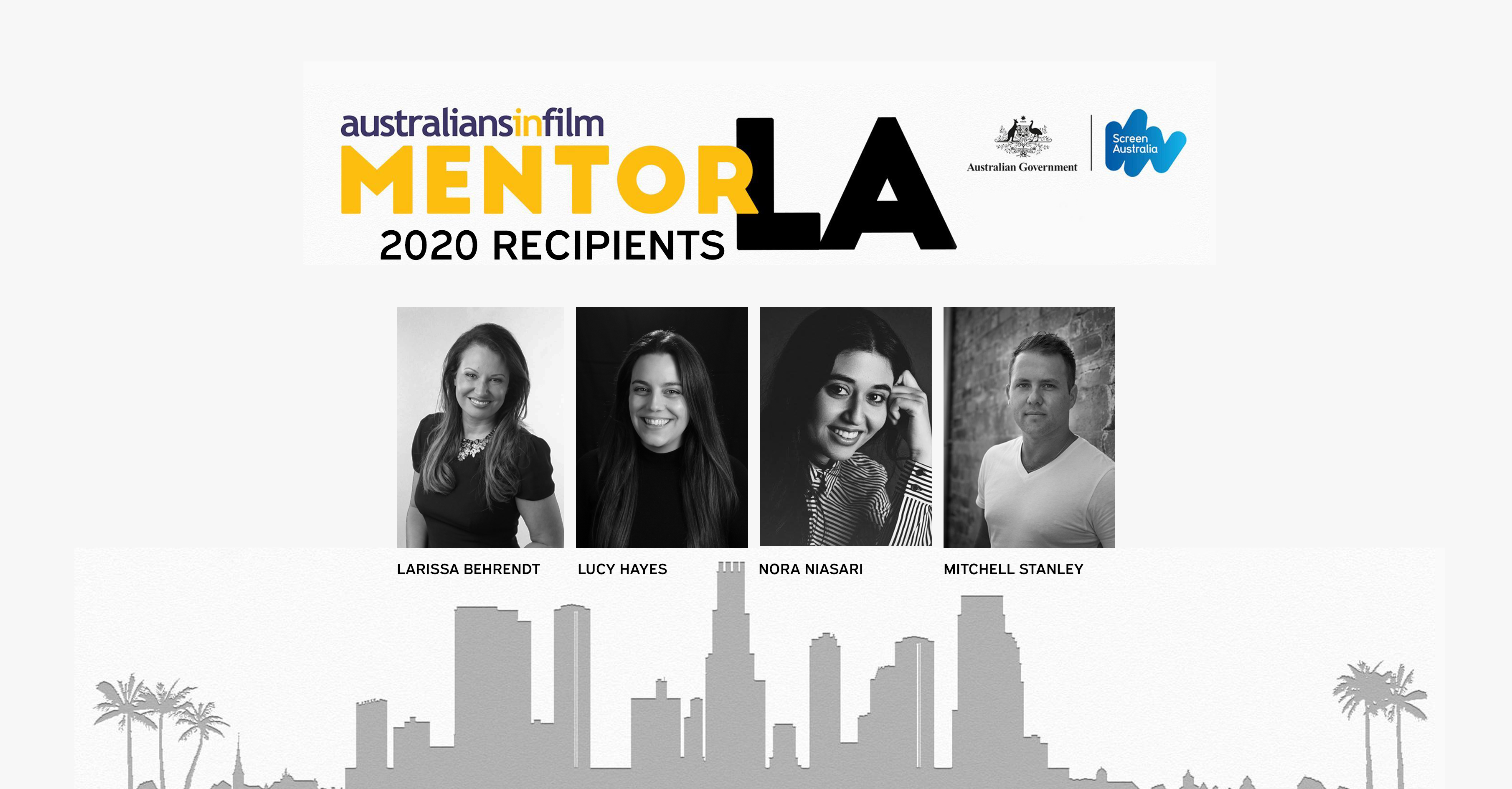 Australians in Film Executive Director Peter Ritchie said the four selected recipients constitute an exciting next generation of new voices in our industry.

“These creatives represent some of Australia’s leading developing talent. They all are driven by a desire to tell unique and important screen stories,” he said.

“Given current global events and the direction of the international screen industry, Australians in Film, with the support of Screen Australia are excited to be providing this practitioner-development program that will empower these four screen creatives to tell their stories that have the opportunity to create change and to reach a large international audience.”

“We are incredibly grateful for the generosity of Luke, Alethea, Zareh and Jiao whose knowledge and wisdom will bolster the Australian screen sector and the stories we tell to the world.”
Screen Australia Chief Operating Officer Michael Brealey said, “Congratulations to these four talented filmmakers. This is an incredible chance for them to gain insights into the US industry, get international perspectives on their own projects and advance their careers.”

Gamilaroi/Eualeya woman Larissa Behrendt AO will be mentored by Alethea Jones. Larissa, who has a legal and broadcasting background won the Australian Directors Guild Award for her documentary After the Apology, directed the Walkley-nominated documentary, Innocence Betrayed, and her most recent documentary Maralinga Tjarutja recently screened on ABC TV.

“I am so grateful to Australians in Film and Screen Australia for this amazing opportunity to learn through a mentorship with Alethea Jones. This kind of career development is invaluable and I am deeply appreciative and excited about it! This is a chance to learn more about my craft and to think more clearly about my career goals from someone with great experience and insight.”

Larissa is an award-winning writer/director and author of fiction and non-fiction with a passion for telling the stories of Indigenous Australia. She has a legal background, is an experienced researcher and is involved with several arts organisations and educational programs. She also won the Australian Directors Guild Award for her documentary After the Apology. It premiered at Adelaide Film Festival in 2017. She also wrote and directed the Walkley nominated documentary, Innocence Betrayed that aired on NITV in 2014. Her short film, Under Skin, In Blood, screened at Sydney Film Festival and Melbourne International Film Festival in 2015. Her short film Clan won Best Documentary at the Canberra Short Film Festival and the Shorts Film Festival in Adelaide in 2015. Her short film, Barbara, has been nominated for an AACTA award and Dendy Awards. Her latest documentary, Maralinga Tjarutja, screened on the ABC on 24 June 2020. She is the host of Speaking Out on the ABC National Radio network.

Alethea is a writer / director / producer with an inclination towards elevated and comedic storytelling in film and television.  Currently, she is attached to direct the technicolor musical  The  Big Gay Jamboree  (Paramount Studios). Alethea has directed episodes of TV including  Lodge 49  (AMC),  Dollface  with Kat Dennings (Hulu) and  Wrecked (TBS). She directed and Executive produced the following two series:  Dispatches from Elsewhere  starring Sally Field, Jason Segel and Richard E. Grant (AMC) and  Queen America  starring Catherine Zeta Jones and Judith Light (Facebook Watch).  She is currently in production on 5 episodes of a new grounded sci-fi comedy for HBO Max called  Made for Love  with Ray Romano, Kristin Millioti and Billy Magnussen. She also has a series in development with HBO Max called  Classified.

Lucy Hayes, an award- winning film & television producer will be mentored by Zareh Nalbandian.  Her films have played at high profile festivals around the world, including Berlin, TriBeca, Sydney, and Austin.

“I’m thrilled and beyond excited to be taking part in the MENTOR LA program. I have great respect for Zareh Nalbandian and Animal Logic, and I very much look forward to further developing and refining my skills as a producer under his guidance. I’m very grateful to Australians in Film and Screen Australia for providing this wonderful opportunity and can’t wait to get started!

Lucy Hayes is an award winning film & television producer. Her films have played at high profile festivals around the world, including Berlin, TriBeca, Sydney, and Austin. In 2018, She won the AACTA and Screen Producers Award for Best Australian Animation and Best Australian Short Film for Lost & Found. In 2019, Lost & Found was nominated for an Annie Award and most recently won the People's Voice Award for Best Animated Video on the internet at the 2020 Webby Awards. Her television credits include the animated series Supa Phresh for Nickelodeon, the Screen Australia funded web series Movement, and multiple animated segments for Sesame Street. In 2016, she was awarded a coveted Creative Talent Suite Placement at Lin Pictures (Rideback) in Hollywood, where she worked across the development of Disney's live action Aladdin as well as production of the LEGO films and Stephen King's IT. Lucy is currently developing a range of animated and live action films and television projects.

Zareh Nalbandian, Animal Logic’s Co-Founder and CEO, has been developing and producing large-scale screen projects for over 25 years and has collaborated with iconic directors and artists on some of the most successful feature films of our time. Since leading Animal Logic’s expansion into feature film visual effects in 1996 and feature animation in 2006, Zareh has guided one of the most respected artistic and technical cultures in the industry. Zareh was Executive Producer on The LEGO Movie, The LEGO Movie 2, Academy Award winning Happy Feet, The LEGO Batman Movie, The LEGO Ninjago Movie and Producer on Peter Rabbit 2, Peter Rabbit and Legend of the Guardians: The Owls of Ga’Hoole. Zareh is the Deputy Chair of Ausfilm, a board member of the Sydney Film Festival and a member of the Producer’s Guild of America and the Academy of Motion Picture Arts and Sciences.

Nora Niasari, an Iranian-Australian writer/director will be mentored by Luke Davies.  In 2015, Nora’s Victorian College of the Arts graduate film, The Phoenix (Simorgh)  was nominated for an Australian Director’s Guild Award, her 2017 short film  Waterfall  competed at the Melbourne International Film Festival and this year Nora is releasing her latest  short  film , TÂM, while developing her debut feature film,  Shayda  with producer Vincent Sheehan of Porchlight Films, and developing a project with American producer Gary Foster (Community, The Soloist).

“I’m thrilled to be selected for the wonderful MENTOR LA program. Having studied Luke Davies’ screenwriting for many years, it is a dream come true to be mentored by him in this next stage of my career. Thanks to Australians in Film and Screen Australia for making this opportunity possible.”

Nora is an Iranian-Australian writer/director with a Masters in Film & Television from the Victorian College of the Arts. In 2015, her graduate film, The Phoenix (Simorgh) was nominated for an Australian Director’s Guild Award and was selected for the MIFF Accelerator Lab. In 2017, her short film Waterfall competed at the Melbourne International Film Festival and her documentary Casa Antúnez was nominated for the New Talent Award at the Sheffield Doc/Fest. In 2019, her episodic writing credits included Matchbox Pictures/ABC TV Series The Heights (Series 2) and Thumper Pictures’ Sci-Fi Series Second Time. In 2020, Nora is releasing her latest short film, TÂM, developing her debut feature film, Shayda with producer Vincent Sheehan of Porchlight Films, and a project with American producer Gary Foster.

Australian-born, Los Angeles-based Luke Davies is an internationally renowned, award-winning screenwriter, novelist and poet. Davies’ screenplay Lion (Director: Garth Davis: Producers: See Saw Films) was nominated for a 2017 Academy Award in the Best Adapted Screenplay category, and won the BAFTA for Best Adapted Screenplay.  Davies’ adaptation Beautiful Boy (Plan B / Amazon Studios) is directed (and co-written) by Oscar-nominated Felix von Groeningen (Broken Circle Breakdown), produced by Oscar-winners Brad Pitt, Dede Gardner and Jeremy Kleiner (12 Years a Slave). Released October 2018. Davies’ television mini-series adaptation of the Joseph Heller novel Catch-22, produced by Anonymous Content, Hulu and Paramount Television, co-written with David Michôd, directed by George Clooney, Grant Heslov and Ellen Kuras, shot in Italy in 2018 and released in May 2019. News of the World, Davies’ next feature project, is an adaptation of Paulette Jiles’ bestselling novel, and is set up at Universal Studios, with Gail Mutrux and Tom Hanks / Playtone producing; Tom Hanks will star in the lead role and Paul Greengrass will direct. Davies is currently working on the adaptation of the book The Most Dangerour Man in America by Bill Minutaglio and Steven L Davis, as a limited series for Wiip and Starthrower. Woody Harrelson is attached to star, and as an executive producer.

Wiradjuri man Mitchell Stanley who wrote and produced the critically acclaimed documentary Servant or Slave and produced Warwick Thornton’s documentary series The Beach, which recently aired on SBS TV said he would use the opportunity to learn extensively from Jiao Chen,

“Throughout my career I have been lucky to have learnt from many great practitioners in the Australian film industry, so it’s with deep gratitude and appreciation to be selected by Australians In Film, and Jiao Chen for MENTOR LA2020”.

“I very much look forward to the exchange and guidance offered throughout the mentorship, and through this I hope to strengthen and contribute to the Australian film industry”.

Jiao Chen is the Director of Creative Development at Columbia Pictures, a label under the Sony Pictures Entertainment Motion Picture Group. He is currently working on some of the studio’s biggest titles including the recently released box office success, Bad Boys for Life, and upcoming Ghostbusters: Afterlife and Uncharted.  Before joining Sony Pictures, Jiao was a Creative Executive at Fox 2000. At Fox, he worked on Breakthrough and helped shepherd adaptations of literary properties including the #1 New York Times bestselling novel Children of Blood and Bone. Jiao started his career in Hollywood working as an assistant for producer Dan Lin.

Established in 2017, MENTOR LA consists of four one-hour sessions. Three sessions are held online, and one session is face-to-face in Los Angeles.

The meetings are designed to provide recipients with personalized, first-hand experience of the challenges and knowledge these mentors have learnt from working in the highly competitive Hollywood system. The knowledge provided will help not only bolster their careers, but the professional capacity of the Australian screen sector. The return economy airfares to Los Angeles and living expenses will be covered for the five days in Los Angeles when the final in person session will be held. This will occur once international travel restrictions are lifted as a result of the COVID-19 pandemic.

Screen Australia is the Australian Federal Government agency charged with supporting Australian screen content through development, production and promotion across television, film, documentary and digital originals. The agency administers Australia’s official co-production program, in addition to the Producer Offset tax rebate which assists eligible television, film and online works to be made. Screen Australia provides a range of resources and opportunities to the industry including access to research, market intelligence plus special initiatives such as its highly success Gender Matters program. For more information visit screenaustralia.gov.au.